I'm not sure how long I've wanted a flagpole. It's been a long time. I've had the company, Uncommon USA, Inc. bookmarked for at least the last 7-8 years. I lost count how many times I've visited the site just to daydream. So as I mentioned on Facebook, Elaine and I went to PA to visit with our son and his family last month. On the way home we took a slight detour to stop at the Delaware State Fair.

Well lo and behold...One of the vendors was Uncommon USA, Inc. Had Elaine not been with me I would still be wanting a flag pole. Like so many times before she was there urging me to just do it. So, I did it. I made the purchase and arrangements for it to be shipped.

It arrived while my son and his family were here. I only mention that because I thought he would take pity on his old man and dig the 16x30" hole required to set the receiving sleeve in concrete. I was wrong of course. So the day they left I got out the post hole digger that was out in the shed. Once I got through the cob webs I ventured into the front yard and picked just the right spot.

I'm here to tell you that physical labor is way overrated. Now there was a time, many years ago, that I worked for a fencing company. and digging post holes was an almost everyday occurrence. But let me assure you those days are long gone. I will admit to a tremendous amount of optimism as I started digging. For about 8" the rain soaked ground was like putty in my hands. My confidence swelled, I still had it! That was of course before I hit the clay that remained for the next 22". To say it was as hard as a rock is only a slight exaggeration. As my arms, back, shoulders and several other hundred or so muscles reminded me that I was 70 and not 25 I reached China. Well it seemed like it anyway. I was ready to call it a day. But now I had this 16x30" hole in my front yard. Knowing full well if I didn't get it filled one of those individuals that come through the neighborhood to leave flyers or charity bags at my front door would step in it and I'd be calling Allstate to check on my homeowners' policy. So out came the wheelbarrow, shovel (more cobwebs) and concrete. Now the instructions called for 3-5 60 lb bags. So I bought four. I went back for the fifth after finishing off the four with 6" of hole still vacant.

Well, after numerous breaks, about a gallon of water, an electrolyte drink and several words commonly reference with a Marine Corps Drill Instructor the job was done. Damn fine job too I might add. I did still have it. It took  a little longer to get it, but I had it.

After two days of letting the cement set it was time to put it up. Finally I have a flag pole. Only two flags are allowed on a pole so the decision as to which two flags I would fly was a tough one. NOT. 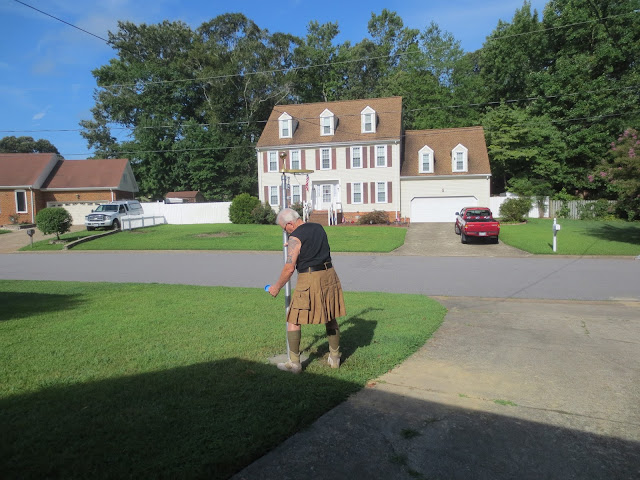 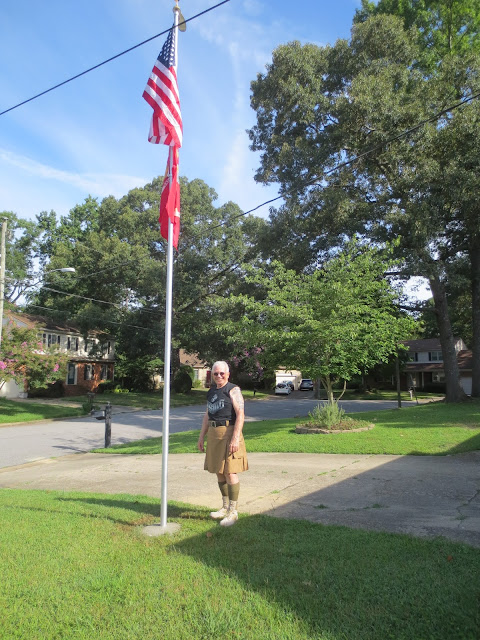 You'll notice the ball at the top of the pole. Well it was shipped damaged. Well we all know how difficult dealing with customer service can be. So I sent an email with a picture of the damaged container and ball to Uncommon USA along with the request about how should I handle getting it replaced. Two days later a new ball was delivered. No questions, no comments, no inquiry has to how or why. They just sent me a new ball. Not only is the quality of their product above reproach, so is their customer service. If your in the market for a flagpole look no further than Uncommon USA.

As I posted on Facebook we also had a caricature done while at the fair. I share it here as well. We told the artist that we quilted together. We think she did a fabulous job. It now hangs in the longarm room. 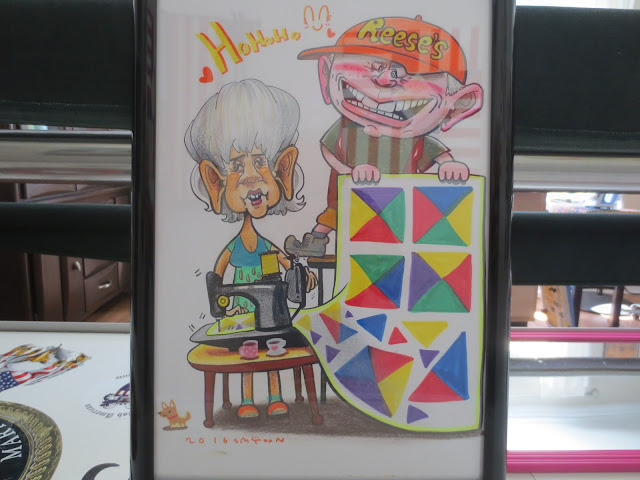 May your travels be safe, you bobbin full and remember...long will it wave!!!