I doubt very seriously if I would ever enter a quilt that I longarmed in a competition. I’ve had quilts I’ve longarmed entered all the while I hold my breath that my longarming didn’t cast a negative aspect on the quilt. I don’t think that I lack the skill, but I know I’m not tolerant enough to be judged when the scale is tipped so easily by the negative. We go through life being judged almost every day. Like it or not we are all a book cover. So, it’s not like I’ve never been judged. Au contraire. We smile too much or not enough. We listen intently or we don’t listen at all. We are too fat, too thin, too tall, too short, too liberal or too conservative. We speak too fast, too slow and are over courteous or not courteous at all. For me being judged for my longarming I’m putting myself in a position, voluntarily, to face the negativity from someone I don’t know and most certainly by one who can’t be 100% objective. For they are human, have likes and dislikes. They may like brighter colors, or certain patterns, hand quilting over machine quilting, modern over traditional, free motion over computerized. Most certainly they have had more training, been certified appropriately and will be more impartial than most. But their task at hand is to find the negative and provide a positive critic on how to improve and raise your crafting skills to the next level. Simply put, if you don’t go home with a ribbon here is a list of things that might make it better next time. Thanks for coming. You can see my tolerance level wouldn’t do well here.

Here are some of the “measurable” criteria judges use to evaluate quilts in competition:
For me, the last one is a killer. If you’re not a computer back tracking is a dangerous avenue to pursue as a hand guided longarmer. I think for the most part free motion quilters have an advantage here. They put in hours and hours on a quilt, thousands and thousands of stitches, stippling and feathering until for the most part the quilt is like an old pair of my Levi’s…it stands on its own. Don’t get me wrong, some of the most beautiful quilts I’ve seen were completed by a free motion artist. But I find all of that stitching to be a distraction from the artistry of the quilt.

I kind of laugh at the fourth one…wave or ripple. Considering the quilting process creates waves or ripples kind of blurs the guidelines of that criteria. I guess for me it would better read. Are there pleats near the quilt’s edge? But hey, that’s just me.

One thing I have noticed when it comes to competitive quilting. There is a group, some national and some at local levels that have a truck load of ribbons. I think for two reasons…one they took their talents to the next level. Spent endless hours to make it all perfect…and to get through the above list without a flaw will take endless hours and a driving desire for perfection. Secondly, familiarity. They are well known to the judges and their work has spent many a review under their trained eyes and may get a nod for a minor inconsistency where others may not. Once again that’s just me.

I can tell you from experience, after inspecting thousands of commercial vehicles from every state in this country. When a truck from company A came rolling through, who had a reputation of excellent maintenance and training and whose equipment always passed inspections hit the line at the same time as company Z…who took short cuts wherever they could, whose training was consistently inadequate and whose maintenance programs were associated with duct tape and bailing wire…Well you can pretty much guess who was looked at closer and scrutinized much more. Even if something was amiss with A it was going to be minor compared to Z and might be overlooked. One is passing (getting a ribbon) and the other is not.

I guess it all boils down to the eyes of the beholder. Whether a judge, the piecer, the longarmer or the recipient of the quilt. The latter probably never seeing a flaw. I’ve received two quilts. One was a Quilt of Valor. There are no words to describe that feeling. The other, and the first, was given to me by Elaine. It was the first quilt she ever made, the beginning of this quilting journey we are on. There are many a judge who would demand it be removed from the room. Little do they know it is the most beautiful quilt ever crafted on this planet. But that’s not the way it works. 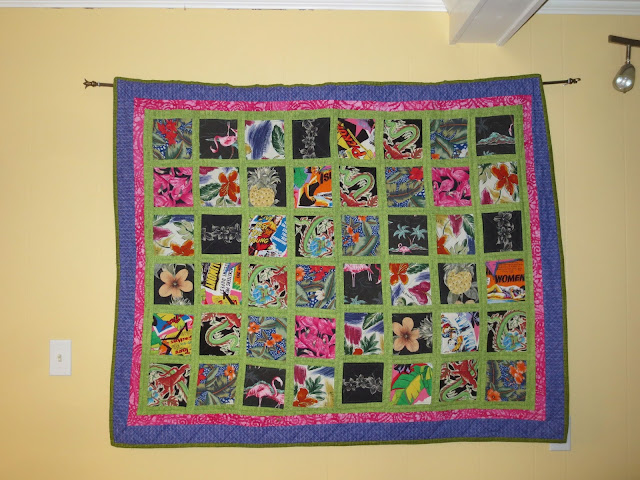 When all is said and done though my hats off to those that compete. You rose to the challenge, took the leap and spent the time, money and put forth the efforts. The fields of competition are tough…a ribbon is the least you should get. So, I’ll participate and continue my journey in a pool of talent I would have never guessed I’d be wading in. But as it should be; I won’t be getting any ribbons just because I’m participating.

Quilt till you wilt…we do.