Recently the topic of encoders came up on one of the Innova Yahoo Groups. One user was apparently informed by Michael to add weights. I concur. I've never mentioned this before but this, in the beginning, was a serious problem on my machine and something that through some trouble shooting was able to overcome, to some degree.

The problem is that the encoders are extremely sensitive, as they probably should be, but they do not track properly and during the process of quilting a row the encoder actually moves to some degree more or less than necessary. Which in the end means that when you return to the "start" point of your pattern it will no longer be there...on the screen it has moved, which means the pattern has moved.

A picture is worth a thousand words. 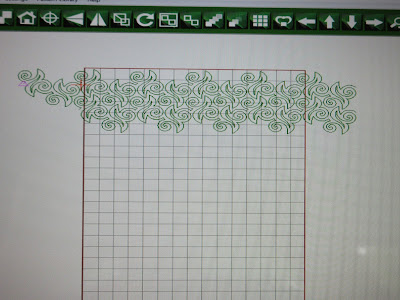 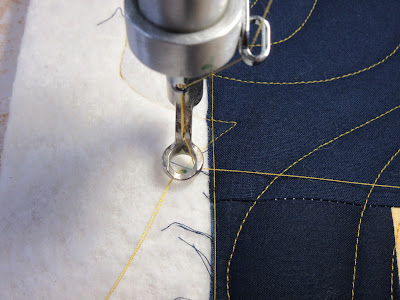 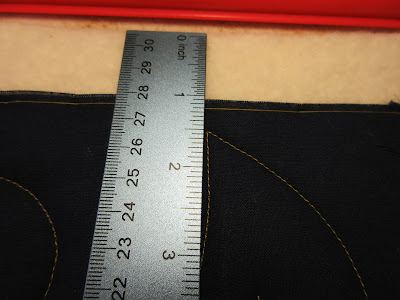 Last High Point (fourth from left) in quilted pattern 5/8" from sandwich edge or 3/8" higher. I know it doesn't seem like a lot but when you multiply that by 8-10 rows it adds up quickly. 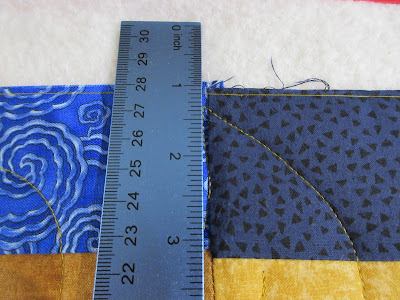 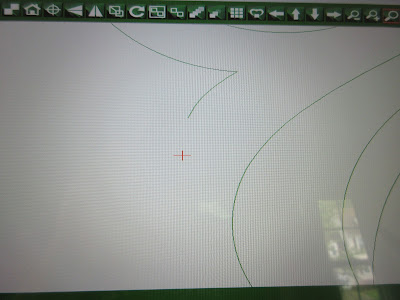 When I first started quilting this movement was on most occasions 1 1/2" to 2". Which meant before I finished the first row the pattern was running off the top of the sandwich or the right side of the pattern was lower than the left side...and a seam ripper was involved. I naturally went to work troubleshooting and discovered the encoder wheels were not tracking properly and had a mind of their own.

To see what I'm talking about when you set up your next quilt put your needle at the patterns starting point...go back and lift your encoder slightly, move the encoder wheel forward or backward a half a turn or so. Then go back and look at the start point on your screen. Yep, it's moved. Which is normal, the encoder wheel moves, the pattern moves. We know the 'cross hair' or 'dot' never moves, it is always in the center of the screen. But I don't think ABM intended for the pattern to move out of alignment more or less than the movement of the arm/needle along the carriage.

What's the fix. Well for ABM my guess is they are working on it. I personally think the encoder wheels need to be 'grooved' like the carriage wheels so that they track properly. For me it goes without saying that the encoders need more weight to ensure they maintain the same amount of down pressure as they roll along the track to eliminate pattern movement. Let me emphasize here; make an extra effort to keep the encoder wheels and the track they run on clean and free of dust and thread debris. What is pictured above is the amount of movement I deal with on a daily basis...which for me is really nothing. But the amount of weight I've had to add to the encoder wheels to get the problem from 1 1/2" to 2" down to 3/8" should not have to be this radical. Honestly it shouldn't have to be at all. You be the judge. 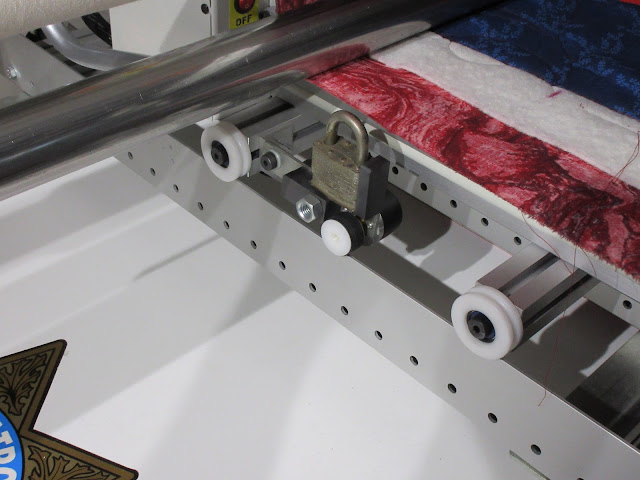 As another precaution to avoid unnecessary movement of the encoders make sure your wires/cords are prevented from contacting the encoders. Not a problem on the Y Axis more so on the X.

I've also read some comments about the Red Snappers interfering with rulers. I guess I have a simple mind. By having your client or if you are the piecer, just make the back a little longer and attach the top so that the Red Snappers don't pass below the top 'stationary' bar. Then the Snappers aren't in the way. At least it's worked for me. I use the Red E Edge as well so I cut my backs 10" wider and ask clients to do the same so the Red E Edges don't interfere with the arm when I'm working close to the sandwich edge. There have been those occasions when the arm has propelled the clamp and Red E. When the propelled obstacles collide with the frame it scares the hell out of the dogs. Not to mention Elaine and I.