We have always had the 12' (133") leaders on our Innova. We have always used, and swear by, Red Snappers and Red E Edge to attach the back to the leaders and provide side tension to the back. Always have and don't see that changing in our lifetime. If it ain't broke, don't fix it.

Well that combination, 133" wide leaders and the plastic tube from the Red Snappers that runs through the leaders sleeve, creates a problem, for us anyway, when loading quilt backs. Basically because of the width of the leaders the machine literally gets in the way. We're sure we aren't the first ones to make this determination, nor the first to make this change but I thought is was worth sharing.

We ordered a set of 10' (112") leaders from The Longarm Network, our dealer. I should say kind of a custom order. We use two "Take Up" (40" long) leaders. One on the Take Up Roller and one on the "Belly Roller." We don't use the middle roller so it doesn't have a leader attached. We float 99.9% of our tops. On those rare exceptions we roll the top, batting and back on to the Belly Roller.

The longer leader on the Belly Roller allows us to lay the sleeve with the Red Snapper tube inserted onto the table providing a solid and stable surface to apply pressure to the Snappers when loading the back.

Now with the less narrow 112" leaders we can move the machine completely out of the way, in our case to the left, and the leader lays flat and doesn't get hung up on the machine. Which for me was a real pain in the process. You thought I was going to say something else. 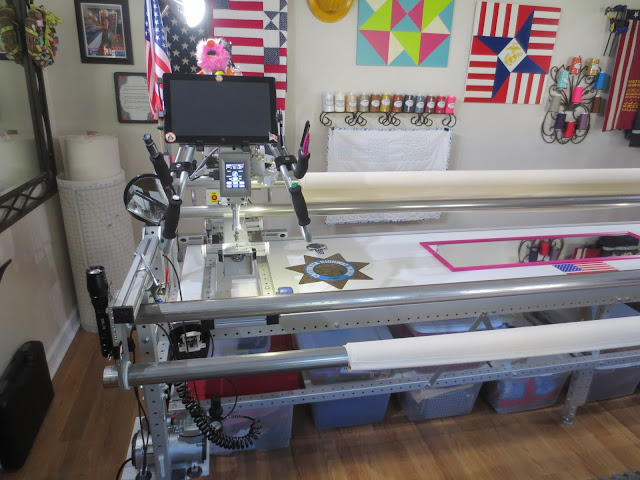 With the new leaders I now have much easier access to the machine when a quilt is loaded. Yes if I get a quilt wider than 112" I'll have to change leaders. I just completed quilt number 547. I've had two quilts wider than 110". One 120" and one 118". I don't think it will be a problem. Currently I have the leaders taped to the roller. If I find myself having to change too frequently you can bet I'll adapt the Velcro, hook and loop, system for attaching the leaders in a heartbeat. 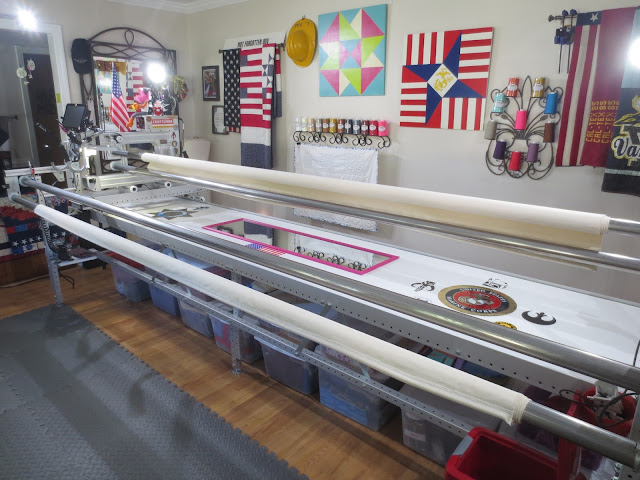 The leaders are mounted so that I can sew right up to the leaders edge on either side. 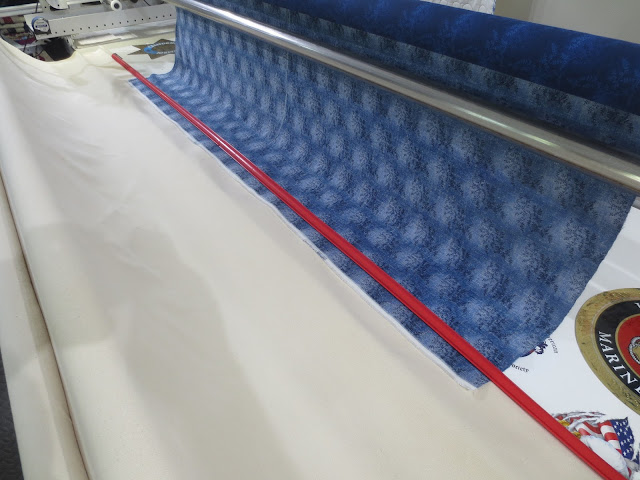 With the longer Take Up leader attached to the Belly Roller I can reach the table and use it to lay the leader flat and have a solid and stable surface to install the Red Snappers to attach the back to the leader.

As discussed in a previous post there have been some new additions to the longarm room. Namely a Craftsman Tool chest combo to hold a plethora of stuff, thread, tools, scissors, and an ungodly amount of stuff I've collected over the last four years longarming. One whole drawer is filled with templates and rulers. It replaced an old dining room hutch, off to Salvation Army, and an Armoire, Now in what Elaine refers to as the Bungalow. Once a bedroom now it's really just a second sewing, crochet, knitting room. Who knew two were needed. 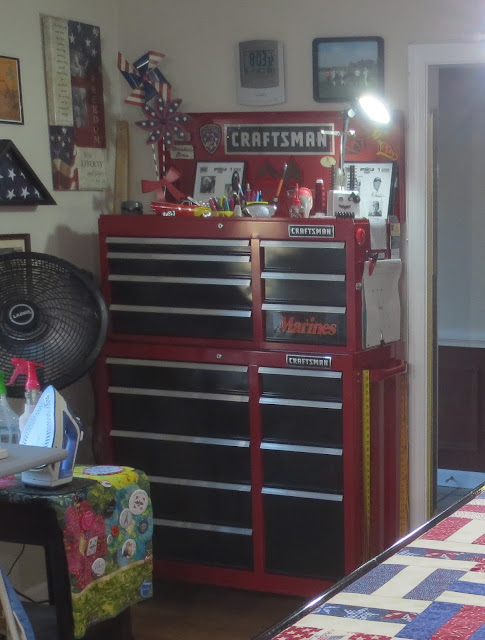 Well that opened up some space. Elaine's wheels were turning with the turbo in overdrive. So now we have some new storage shelving in the longarm room that holds almost all of the Quilts of Valor quilts to be finished along with QOV supplies. I did confiscate the top shelf for my CD Player and speakers. The shelving is to the right of the Halloween wall hanging Elaine just finished. I must admit it's kind of spooky. It glows in the dark. Kind of fun to longarm too. 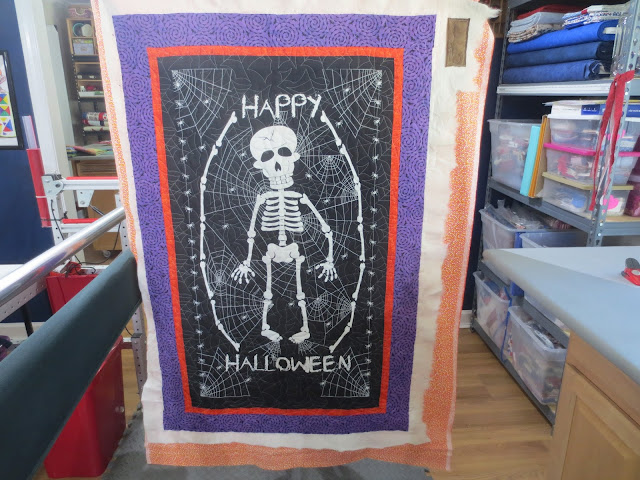 Speaking of Halloween. We can always tell when its getting close. Mike stops by for a beer. 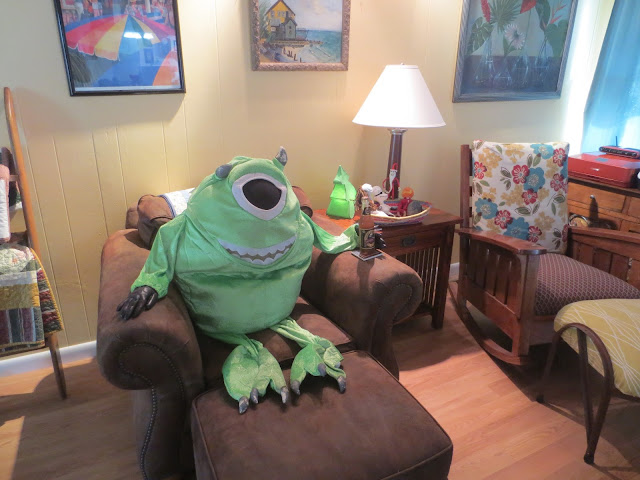 Getting rid of the old hutch, which took up a lot of room and wall space also provided someplace to display a old "printers tray" that has been in the garage for ages. I had no problem filling it with  trinkets. It also provided a place to hang a poster I had a frame made for that depicts the Marine Corps Units that served in Vietnam. So that was cool. 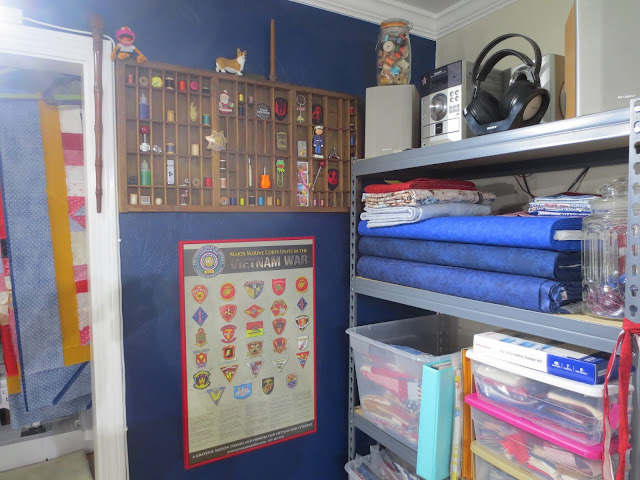 Got to tell you I do like the display of the printers tray and stuff. 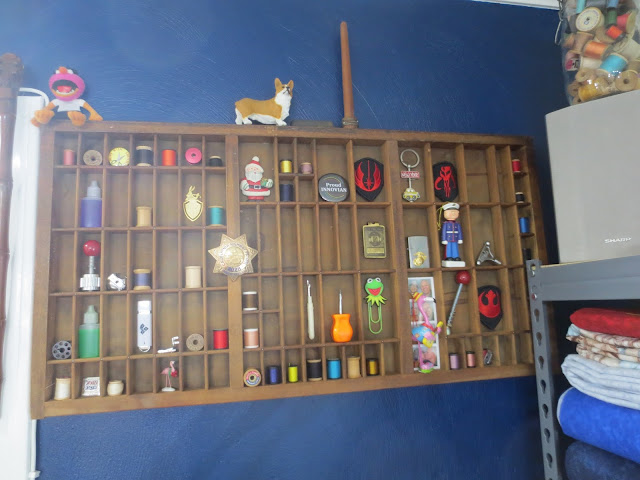 I also want to show this Quilt of Valor...It was made by Lisa D., one of the many volunteers that sews with Not Forgotten QOV. It is a beaut. The white and gold stars, as well as the center piece are embroidered. It will be awarded on Veteran's Day to a World War II Vet. We will be awarding five to WWII group on Veterans Day and more to a group associated with the Daughters of the American Revolution who have served the day following. We checked...they didn't serve during the Revolution. And contrary to some, neither did I. 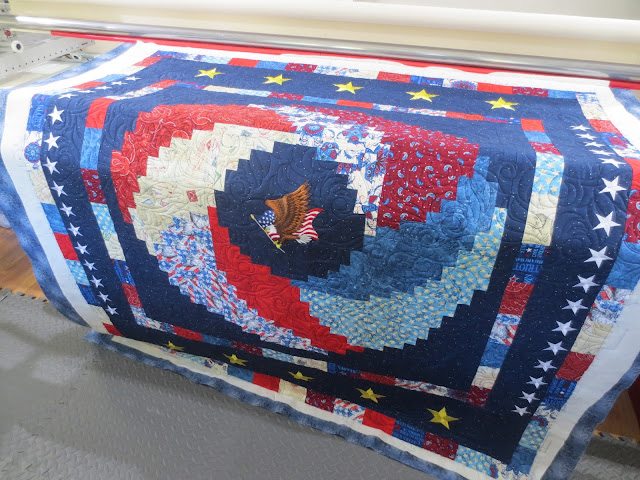 It was also the first quilt that was loaded onto the new leaders. Wish I had done this long ago.
Well time to get out of here. Till next time...