Confessions of a Longarmer...AKA the Leatherneck Kilted Quilter

Before I confess to anything a little background.
Apparently John Paul Jones refused to sail without a compliment of Marines...riflemen they were, sharpshoooters...as it turns out a valuable commodity in battle aboard the Bon Homme Richard in 1779 and other vessels he commanded. Well John Paul was a Scottish American and that was enough of a Scottish association for the Leatherneck Tartan to be registered with the Scottish Tartan Society.

Finding out through a friend and fellow Quilt of Valor Volunteer quilter and member of the Scottish American Military Society, SAMS, that there was such a thing as the Leatherneck Tartan and Elaine and I help with a QOV Booth at the Frederick Celtic Festival, it made perfectly good sense to me to become a Kilted Quilter...it needed to sound a lot tougher than that for me to wear a skirt...so the Leatherneck Kilted Quilter was born. 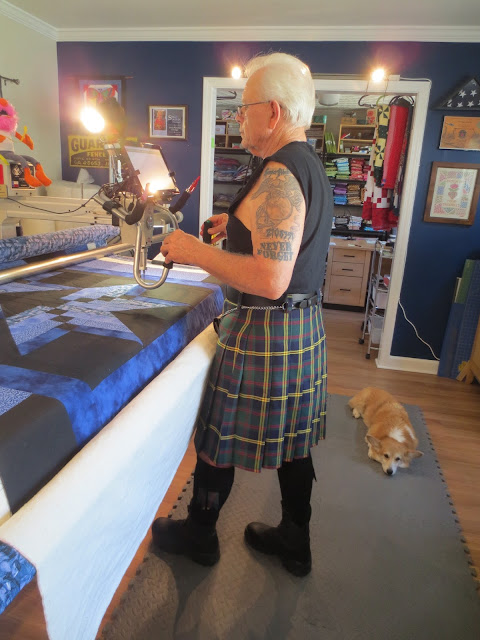 So every now and then he shows up, here and there. One of the there's is at the Binding Bingo/Label Lotto events as the Bingo Caller and Chief Cook, as well as any Celtic Festivals we may attend. Which are a tremendous amount of fun and frolic I might add. It really is a lot of fun. It's not really Bingo...It's QUILT-O. Instead of numbers 'quilting terms' are used in each box. Like...'binding' / '9-Patch' / or 'Seam Ripper.' you get the idea. We have a really good time. Not to mention we get some quilts bound and labeled. 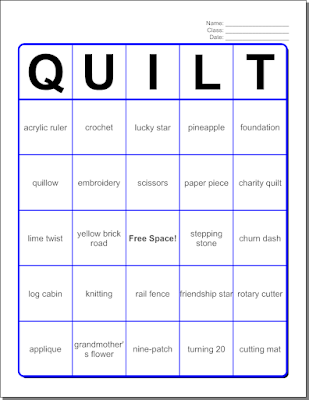 I don't think I'm that bad of a cook.
Or someone is throwing out a lot of
food when I'm not looking. 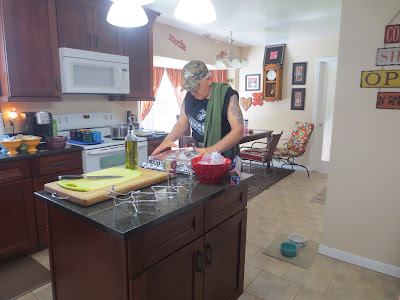 So that is how the Leatherneck Kilted Quilter came about.

Now I'll make some confessions. They are my confessions/observations...I most certainly can't speak for any other longarmer. Whether computerized, free motion, hand guided like myself or whether they stand in front or back or use a stool. Whether they use paper pantos or a computerized pattern device like the Panto Vision system I use. My guess is as many longarm machines as there are, there are that many ways of doing the same thing. My confessions and observations are based on my experiences over the last several years and having completed nearly four hundred quilts, wall hangings, bags, purses or whatever I could load. In some ways we are all like Frank Sinatra...We do it our way. I know...I just aged myself. You didn't see the hair???

I confess...
There is no such thing as "too square."
There is no such thing as "too tight" when loading a quilt.
Needles can't be "too sharp."
I've never used a thread that didn't develop lint. Regardless of what the manufacturer says.
I have my favorite piecers/toppers. IMHO if a longarmer claims this isn't true don't trust them.
A good steam iron is, no matter how it got to your house/studio, a gift from a higher power.
Ironing boards were not created by a quilter...make your own. 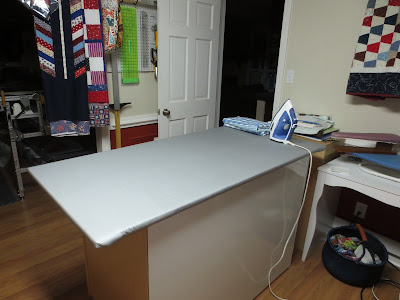 There are many variations of a 'quarter inch.' How many piecers/toppers are there?
The difference in a back that is four inches longer and wider than the top instead of four inches longer on top and bottom and four inches wider on each side of the top is like the difference between the depth of a golf hole and the Grand Canyon. In other words "huge."
I confess...I ask for ten inches longer and wider than the top.
Seam rippers are necessary and evil. Mine is called "Jack." I think all would agree Jack was mean and evil.
I have never pinned a quilt to a longarm leader...and never will.
Red Snappers (Renae Haddadin) came from the same place as the good steam iron.
I am an Innovian...I use a Innova Longarm...That doesn't make it better than or worse than any other manufacturer's equipment. It is the one Elaine chose...and when Elaine is happy I'm happy. I'm not sure though if I would have become a longarmer if she had chosen another brand. I'd still be happy she was happy...but I honestly don't think I would have ever longarmed a quilt.
I confess...I subscribe to "If it ain't broke, don't fix it."
I am pushing three years on this machine...still using same everything that it came with except needles. Everything. With the exception of the back handles and start/stop buttons.
I've never used a paper panto or quilted from the back of the machine.
I have always considered the longarm to be a power tool. I have never shied away from a power tool.
I haven't adjusted the tension on the machine in over six months, then it was only a half turn. I make almost all adjustments on the bobbin case and those rarely.
I stitch a tension check on a scrap of fabric off the quilt top before every quilt.
When I find something that works...I stick with it.
According to the manufacturer's instructions I load the bobbin into the bobbin case backwards...it has always worked.
I use synthetic oil in my hook assembly. If it makes an automobile run better and last longer why not a hook assembly.
I clean and oil the hook assembly at every bobbin change.
I use an air compressor with a moisture collector built in...It doesn't leave brush bristles stuck in my hook assembly and unlike canned air it is dry. No moisture.
I confess...I'm stubborn. This can be substantiated. A list of names, starting with Elaine, can be supplied for verification.
Just because the manufacturer recommends it, makes it and sells it as an accessory doesn't mean it is the only thing that will do the job.
I confess...I am constantly looking for less expensive alternatives.
I've only done one quilt that I didn't float the top.
I use magnets across the quilt as I go instead of basting. Helps eliminate the 'bottom frown' and saves time. 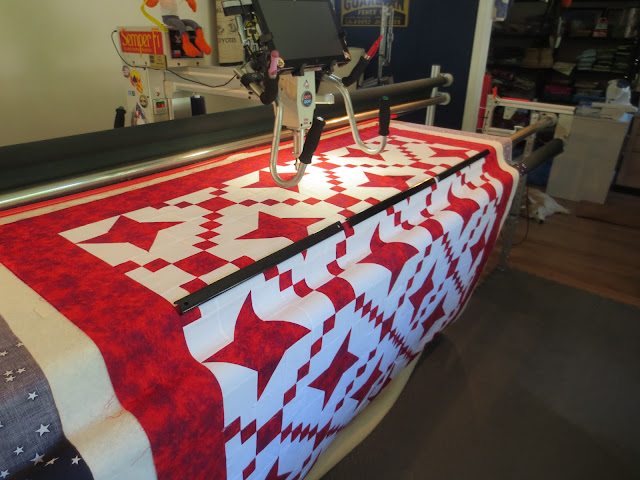 I see, know and will always remember my mistakes...usually only made once. I will never point out others mistakes...they know where they are. I said usually.
Every quilt has its challenges...some are just more challenging than others.
I have never longarmed an ugly quilt and never will.
I do three things that eliminate the need for a psychiatrist...golf, ride a motorcycle and longarm. I'm not saying I don't have mental disorders...I golf, ride motorcycles and longarm.
Things I know for certain...
Love conquers all.
I live in the greatest country on the planet...period...faults and all.
I will always be a Marine.
I have been called a lot of names...dear, daddy and gramps really stand out.
Honesty is the best policy.
You never have to remember the truth. It is what it is.
Like the tattoo says...I will "NEVER FORGET."

I'm sure there are other things I could confess to but why open a Pandora's Box. Some things are left better unsaid.