Well we can vouch for the wet...I'm guessing based on some of the news channels and social medias some will vouch for the wild. According to the local weather reports our area got 13.5 inches in the last two and a half days. This time we missed everything but the wet. Well and one golf day. Other than that business as usual, quilting, hair cut for me, perm for Elaine, some shopping and a little more Netflix and Amazon Prime than usual.

They are not always new quilts. This one belongs to a friend. A friendship that developed when he was our contractor during our remodel in 2007 and 2008. We recently had him over to redo our front porch railing. It was apparently new in 1974 when the house was originally constructed. To say it needed replacing would be one of those understatement things.
The quilt was made by his grandmother in the early fifties. Machine pieced and quilted. Elaine appliqued several pieces of material over ones that were, well let's say well loved and worn. Then I loaded it on the ever dependable Innova and restitched those areas where the stitching used to be. Not as simple as it sounded when I said, "No problem." Now don't repeat this, I'll deny it. Don't what anyone getting the idea I'm a soft touch. As I worked on the quilt it became very clear that it was a labor of love. Apparently she made one for all of the grandchildren. That sounds very familiar. 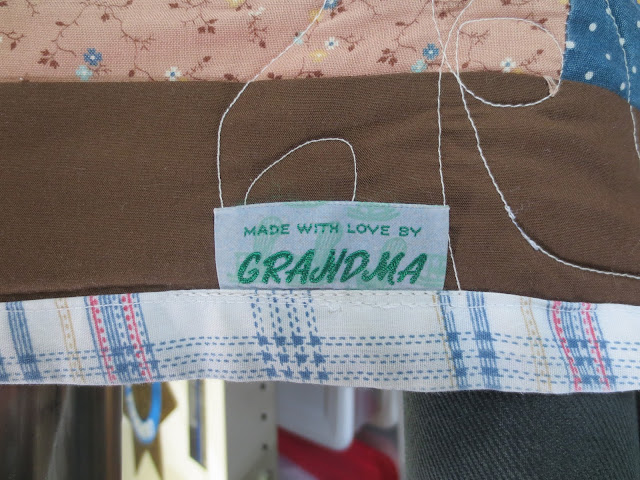 Not uncommon to see this. It is well loved, well used and well cherished.

This one is a monster...It took almost every bit of usable space on the longarm at 110'x110". It was in fact the second largest I've done and certainly the most difficult. Four quilting patterns, two thread colors and I lost count of tie offs. It is a pattern from Fons and Porter designed by Julie Popa. As I recall published around 2008. The pattern can be downloaded via the Fons and Porter website. I found it on their site under Two Color Quilts. 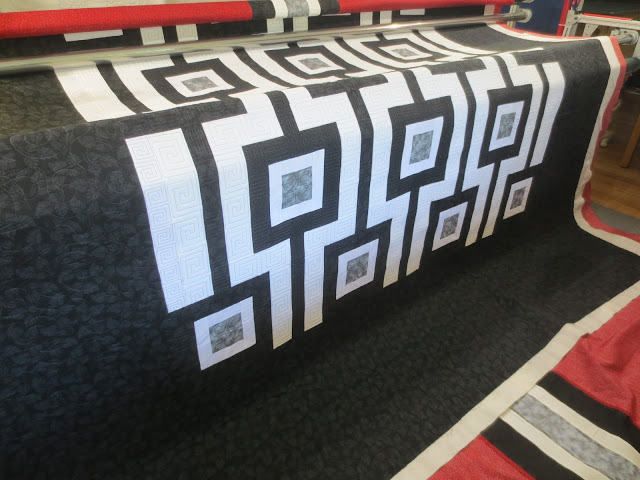 Of course I worked on a couple of Quilts of Valor, made numerous awards since the last post and with Veteran's Day rapidly approaching getting ready for more. 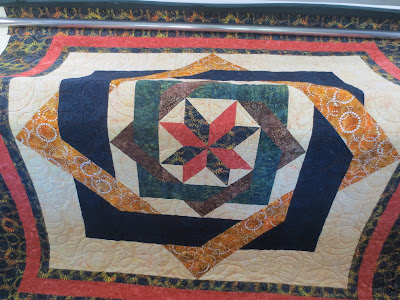 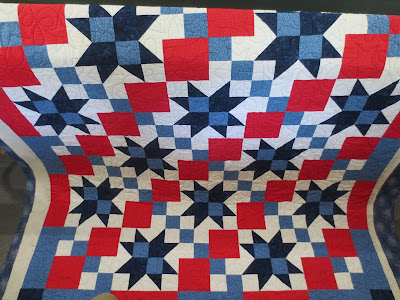 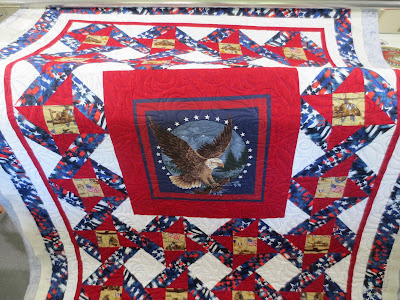 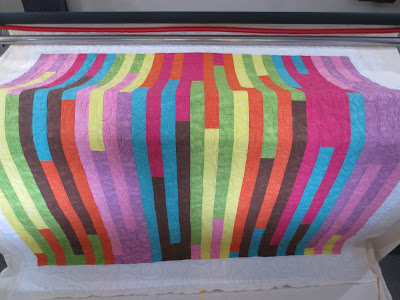 Yes the last one is a QOV. We, Not Forgotten QOV, work with Serendipity Quilt Shop in Dagsboro, DE. They handle the supply and distribution for Quilts of Valor to the Joint Personal Effects Depot. These are the personnel that handle the necessary duties for our war casualties. At the completion of their tour they are awarded Quilts of Valor. This is one of those instances where the typical patriotic materials and patterns vary. Some of the recipients would prefer more traditional colors and patterns. Considering the commitment and sacrifice they make to our country and to those that have paid the ultimate price in defense of our nation we provide several different type quilts when ever possible. We believe it is the least we can do considering how these individuals have been 'touched by war.'

Update...Lighting Stitch...everything it is advertised to be and so much more. I can't even tell you how much it has improved the quality of what I do. No more skipped stitches and the tie off feature is worth it's weight. Huge improvement to my Innova.

The flag pole...works like a champ. Yes, no matter what...I stand. 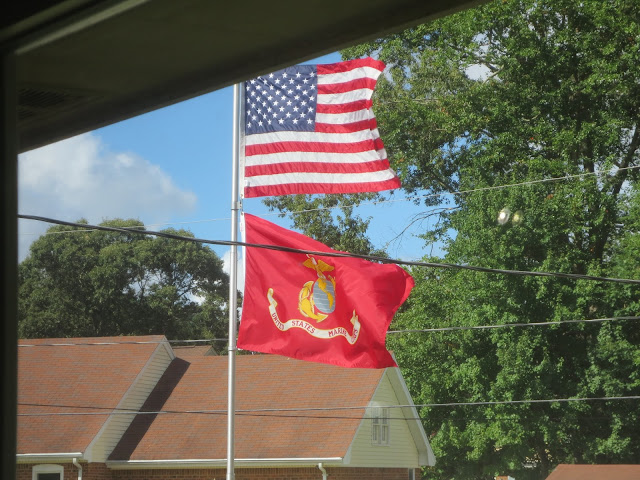 So throw in a couple of friends quilts and it's been a pretty productive period since the last entry. 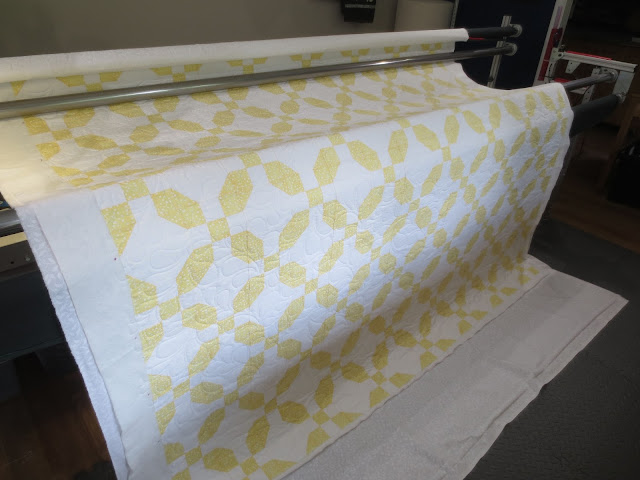 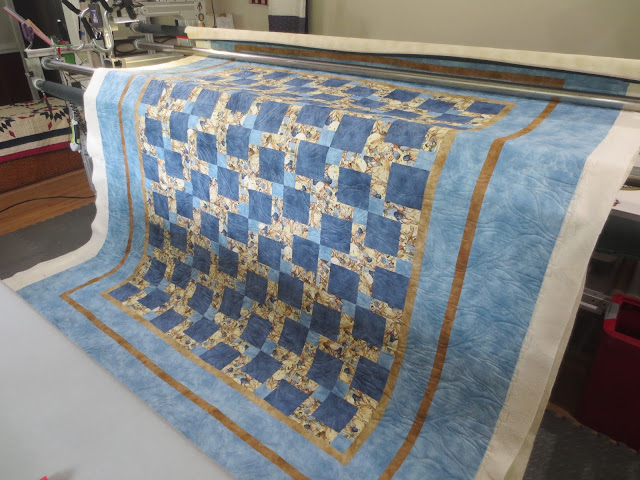 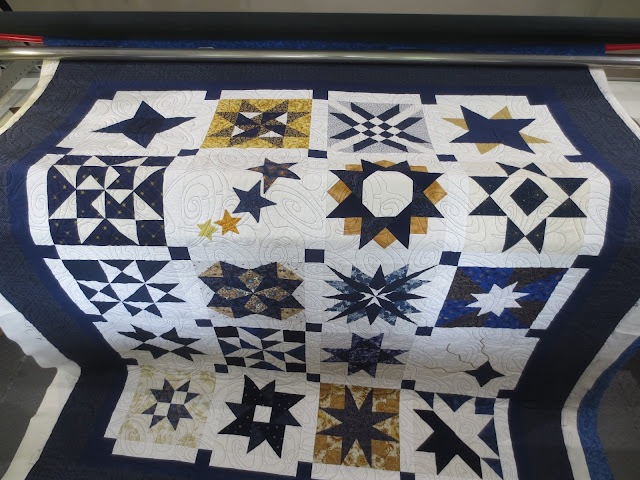 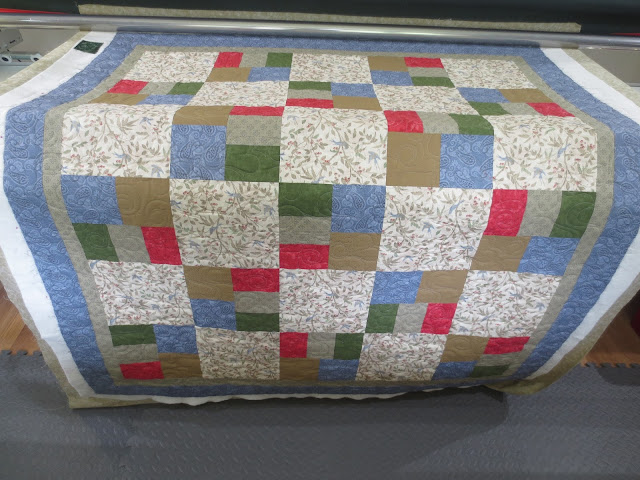 So until I get around to posting again...as they say...