To explain the emotion, joy, sadness, reflection, camaraderie, friendship, pride, sense of honor, duty and sacrifice that is made in the name of freedom, concern for others, duty, commitment, integrity and selfishness would take an Ernest Hemingway or a Robert Frost of which I am not.

What I am is a motor rider, a Marine, served a career in public service in two fields, fire service and law enforcement. So when I found out about FDNY-Marine Corps Association's Iron and Steel NY to Quantico Run it was a given that I would make the southern leg from Maryland House Service Center north of Baltimore to Quantico. It was to be the last two pieces of steel from the World Trade Center to be escorted to a museum and erected as a monument.

In this case the monument was to be in Memorial Park at the National Museum of the Marine Corps in Triangle, VA.

The following link was taken by a motorist David Wyttenbach who had stopped along our route about 10 miles north of Quantico/Triangle as we passed. It captures the escort from the first vehicle to the last and is about 6 minutes long. It is a Facebook post. You may have to copy and paste.
https://www.facebook.com/video.php?v=10152790323798707&set=vb.718523706&type=2&theater

At the end he takes a shot of the overpass. On the overpass you will see those who have stopped to watch as the escort and steel passed. You will also note a Fire Truck and Fireman. It was a 108 mile ride from Maryland House Service Area to Quantico. This occurred on EVERY overpass. Along the sides of roads, near on ramps and side streets the whole route. Waving flags, banners and the hands of mothers, fathers, sons and daughters that stand behind those that stand for us in harms way.

In this case the monument was constructed to honor and remember 17 of the 343 Fire Service personnel that were lost on September 11, 2001. As well as being members of the New York City Fire Department they were Marines. All serving and surviving either Vietnam, Beirut, Desert Shield, Desert Storm or Enduring Freedom Marine Corps assignments. They tragically made the ultimate sacrifice at the hands of cowards rushing into the chaos to help and protect others. They will never be forgotten and this monument has been erected in tribute to them for their unselfish loyalty to their fellow man and to provide future generations with the knowledge of their bravery and unwavering commitment to an oath of duty.

I could not have been in better company with those that rode and stood this Saturday and Sunday in October, 13 years later. The idea that began at a meeting of the FDNY-Marine Corps Association in 2006 came to fruition with a resounding Mission Accomplished. These were the last two pieces to be escorted. There were several other runs and the logistics for them all must have taken countless hours.
If you would like to read up on the runs you can do so at: Again copy and paste.

I have been cherished with many good memories. The day I met my future wife, the birth of my son, my grandchildren. I have been blessed with family and friends over the years that puts smiles on my face and in my heart. To be part of this event, to be able to pay a small tribute to these men, these brothers, these patriots becomes one of those memories. For on these days we did not share in the sadness of our loss but the joy of the gains these men brought to the lives of those they left behind. We all benefited because for their moments in time they gave all they had to give without asking for anything in return.

A couple of motors showed up. Side note...the motors coming from NY did so in heavy, heavy downpours. We were a lot luckier. It stopped raining at 0645. We left at 0730. 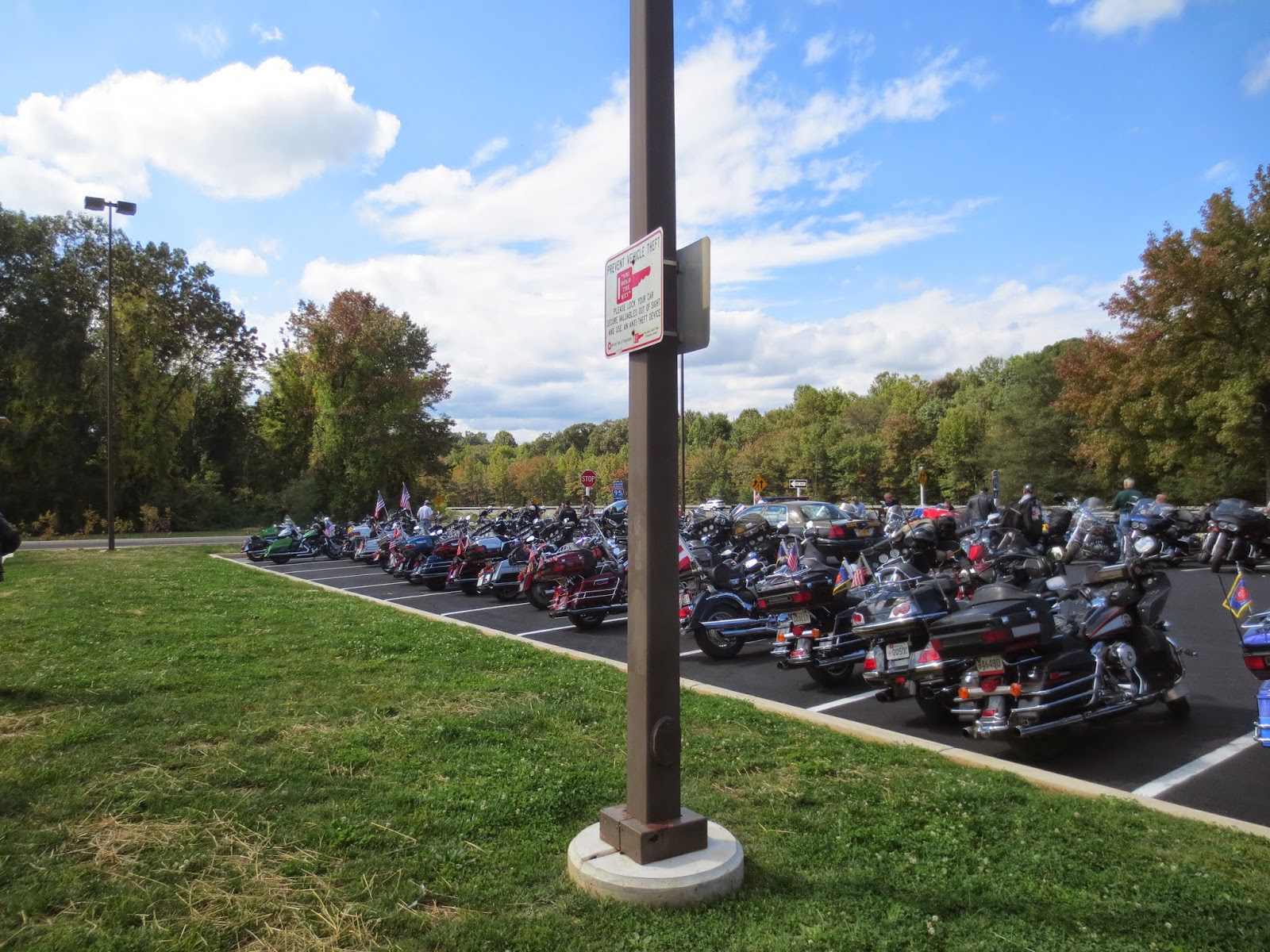 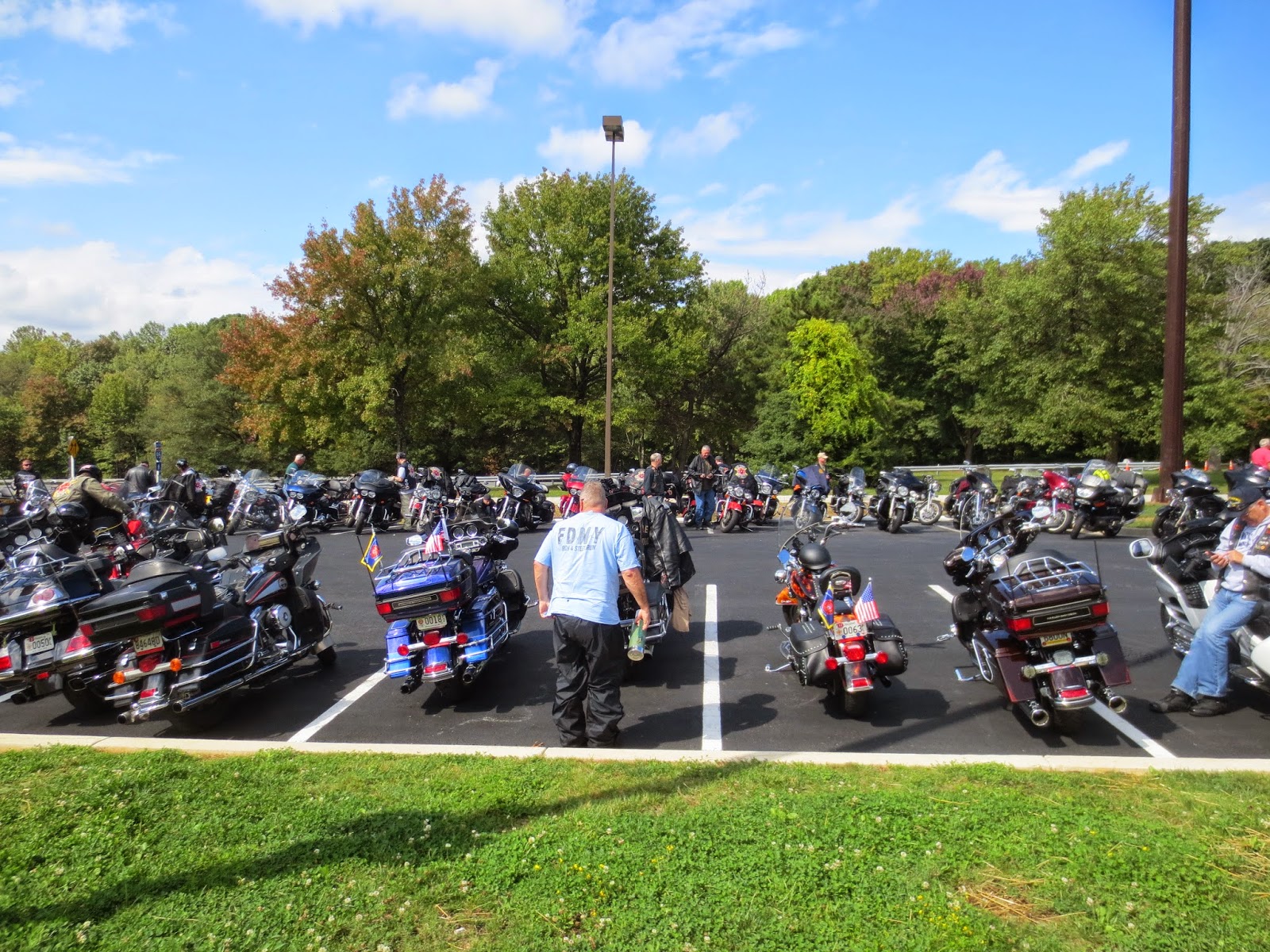 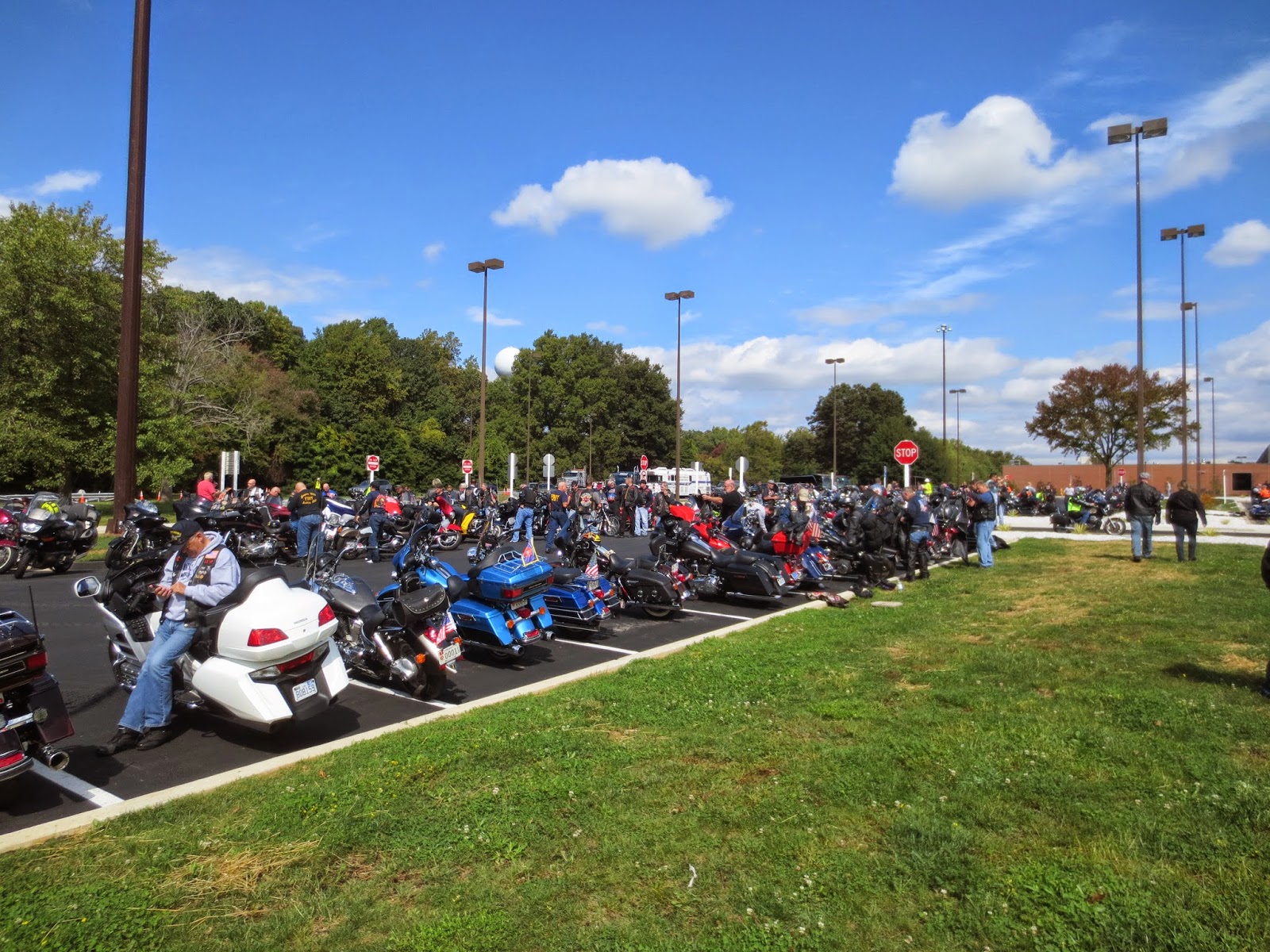 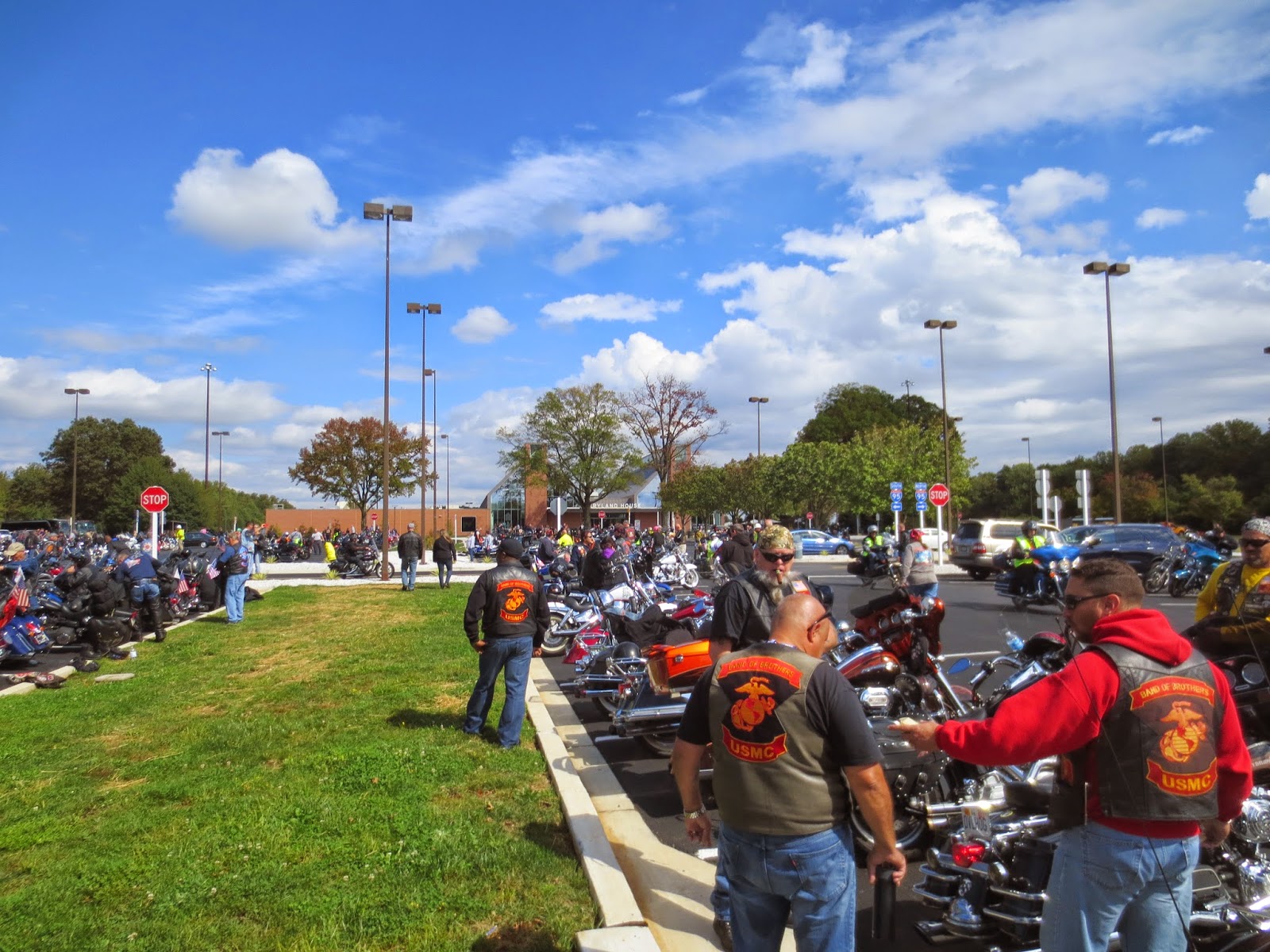 When the flag is this big it's always handy to have a couple of Ladder Trucks around. 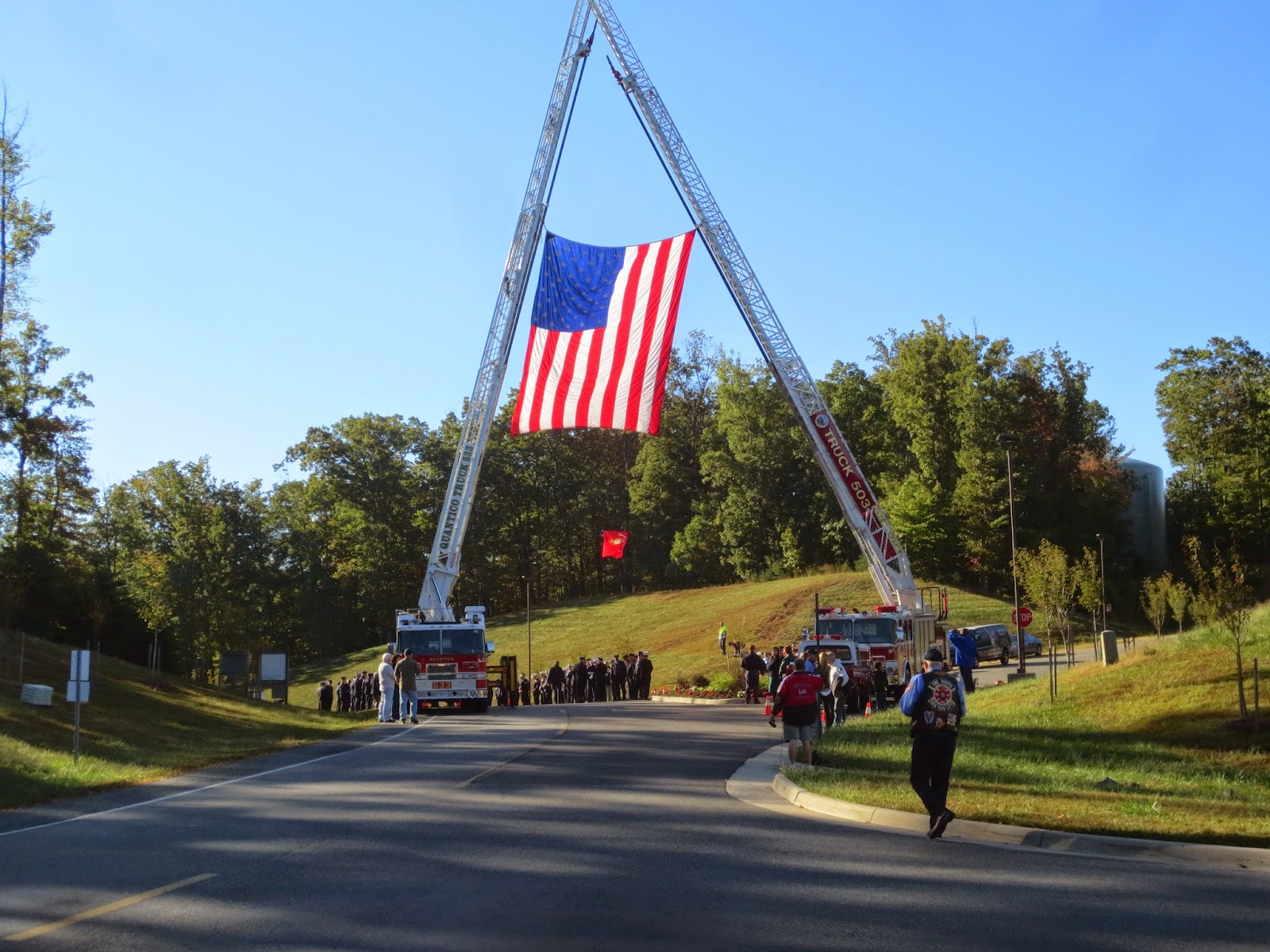 This is the Sunday Procession coming in for Dedication Ceremonies. 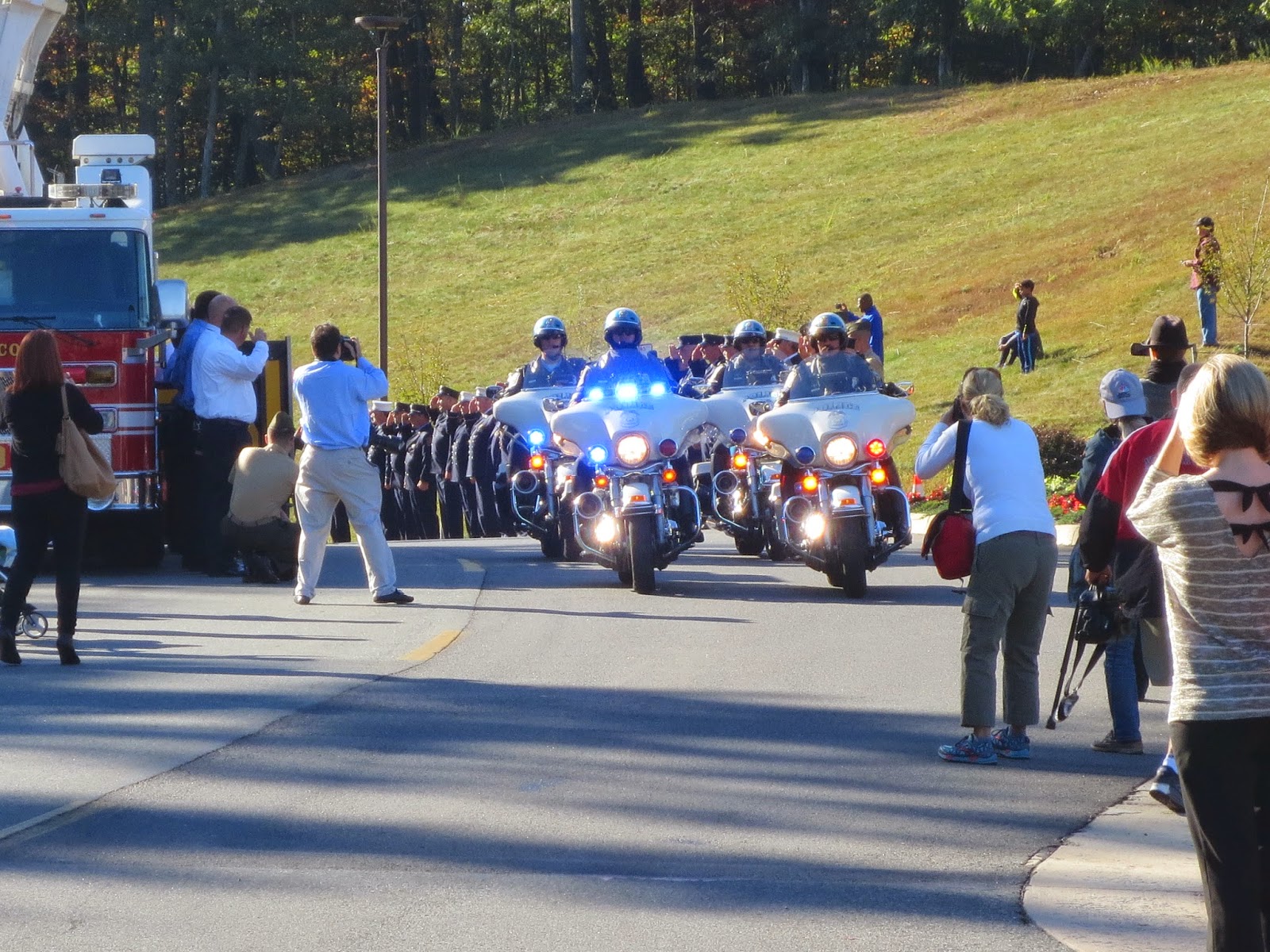 I mean really. When was the last time a fire department had a ceremony without an antique fire truck? 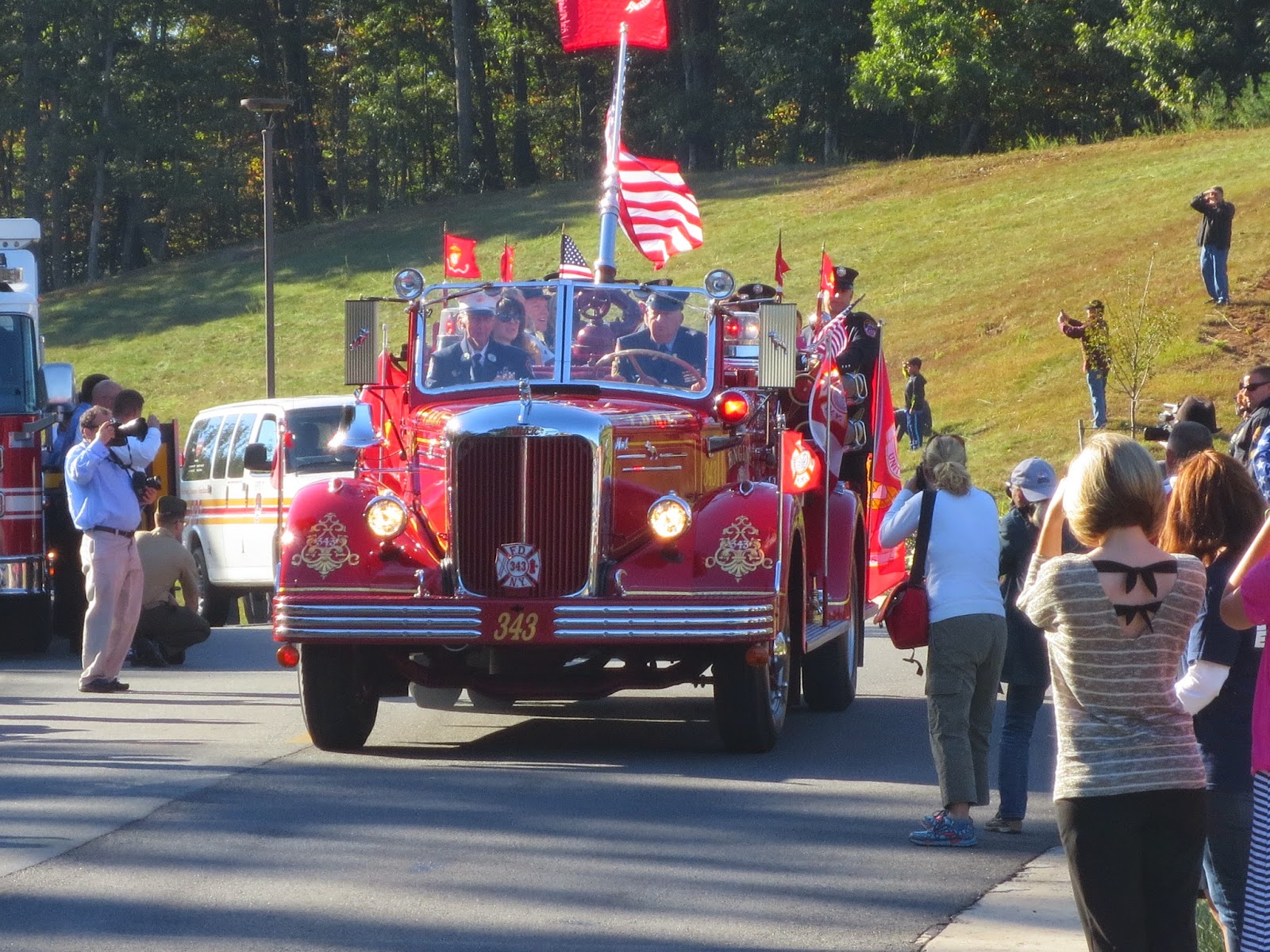 A new day, a new ride and a whole lot dryer. 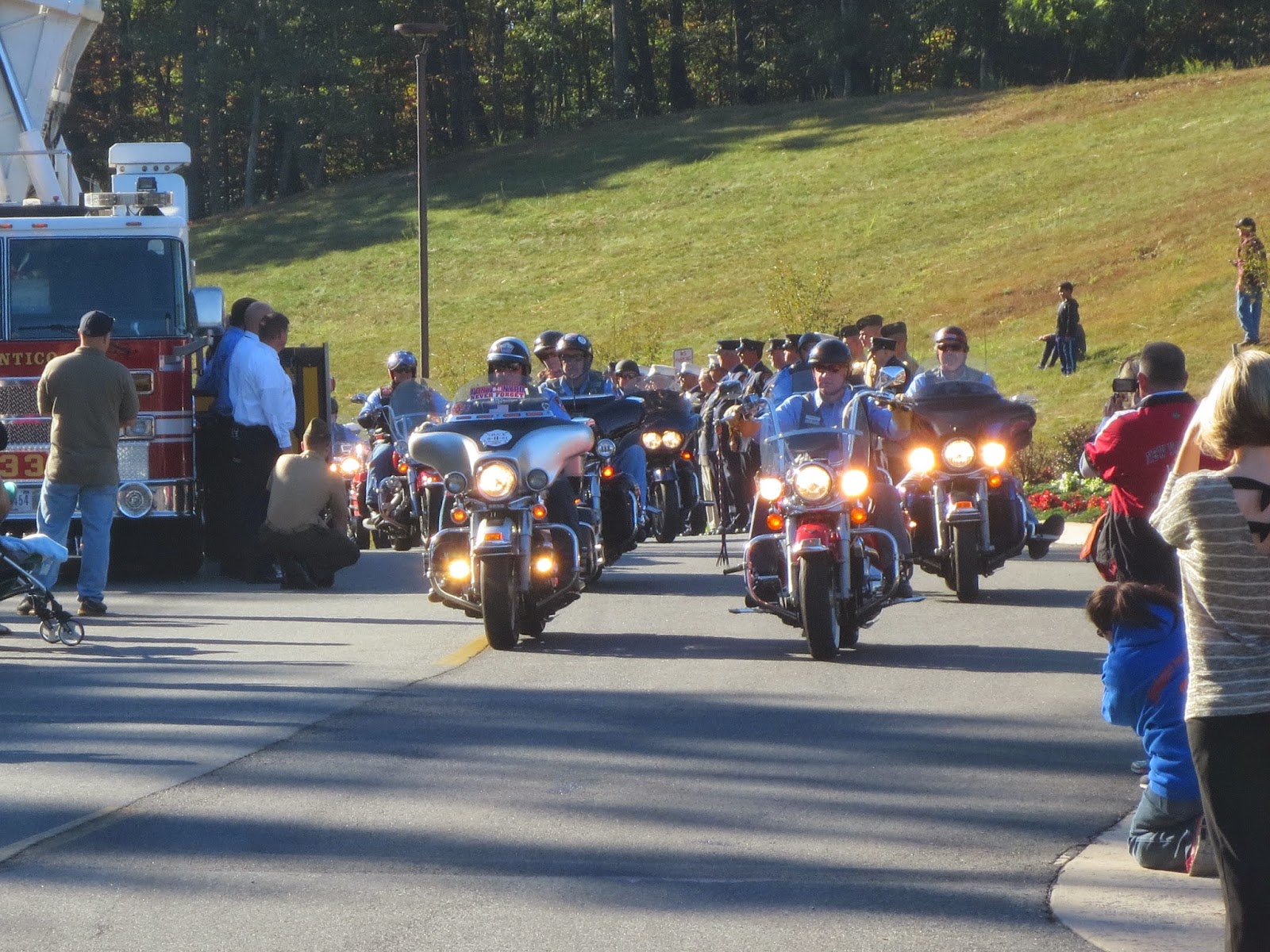 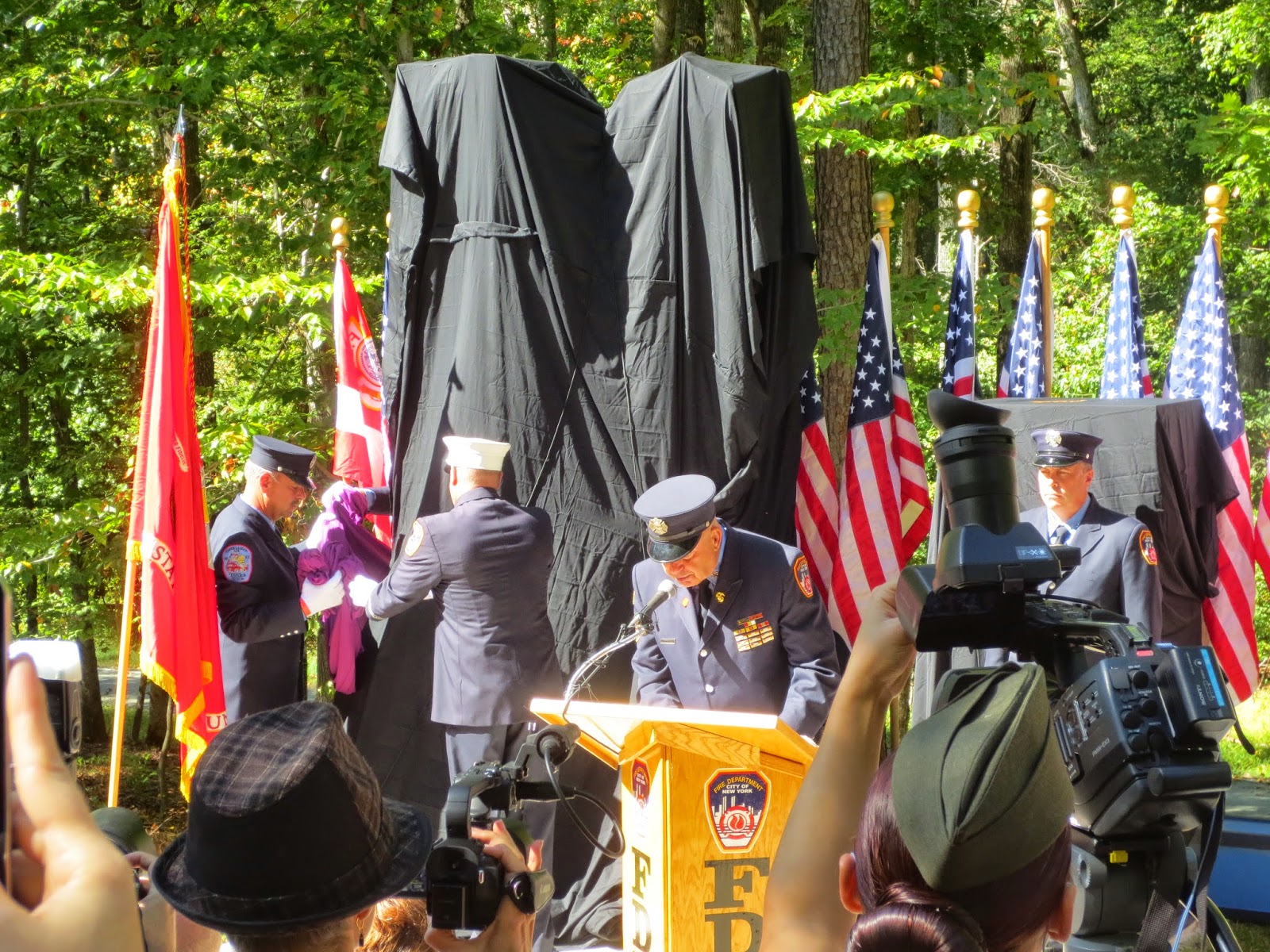 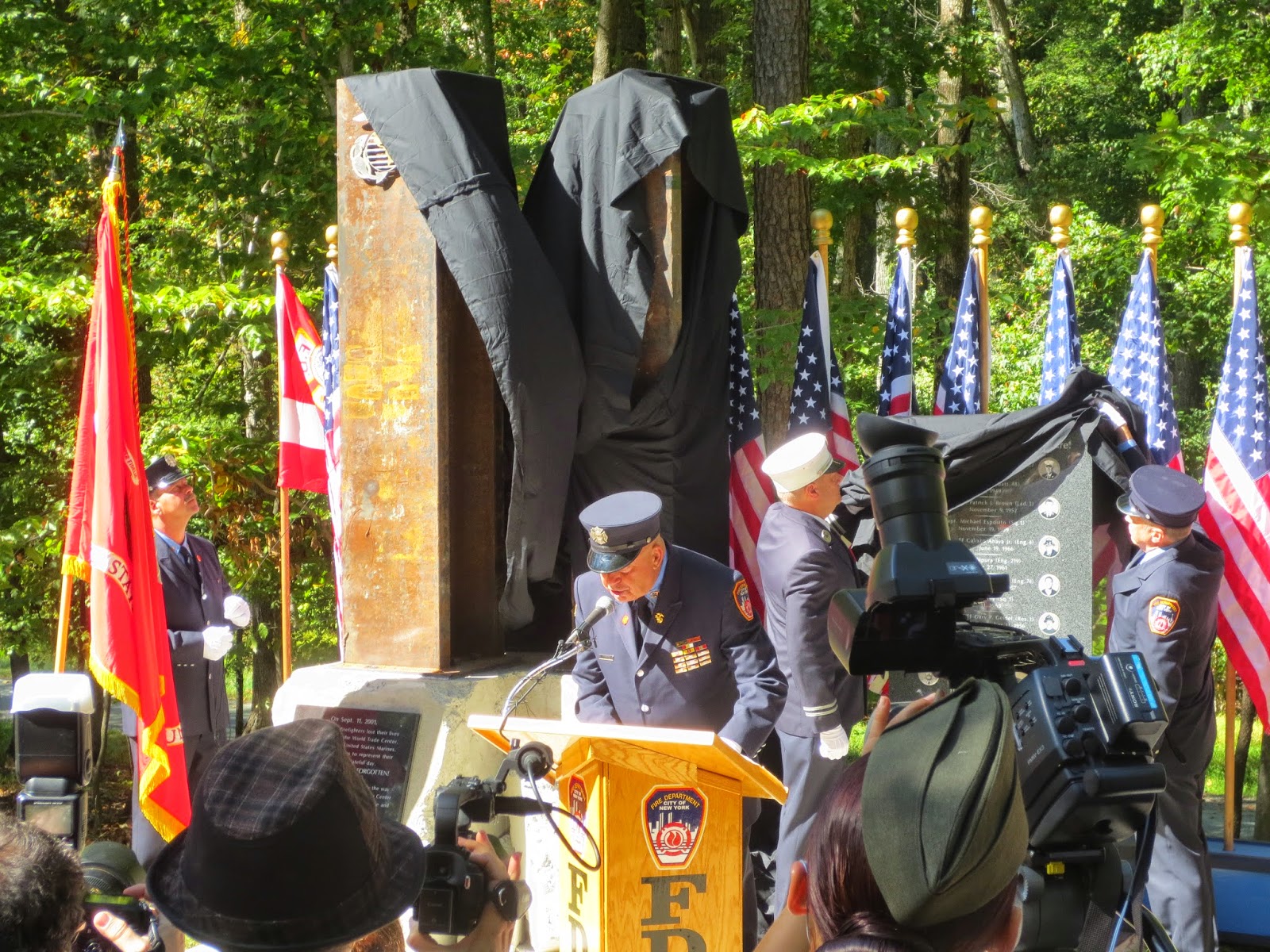 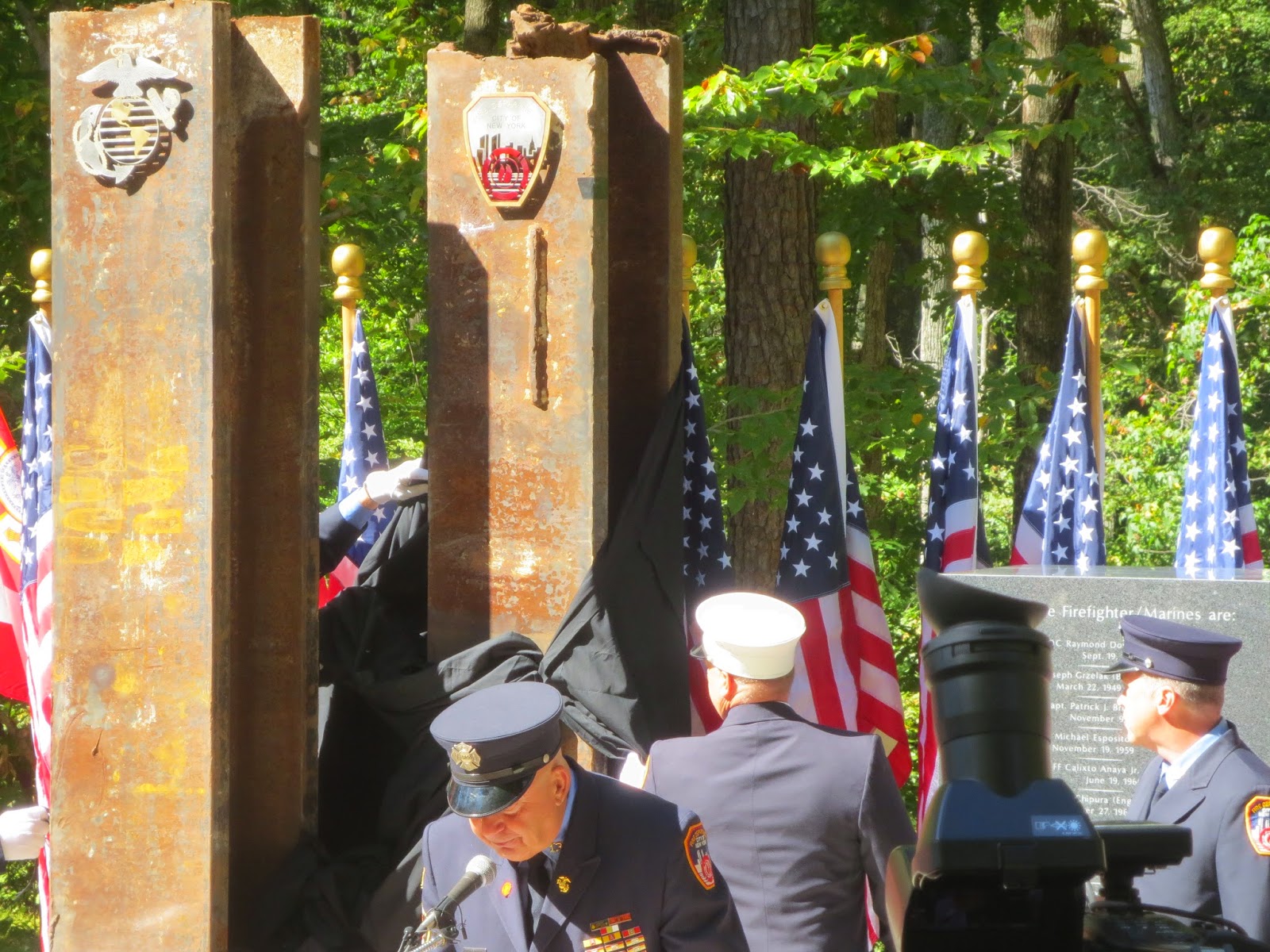 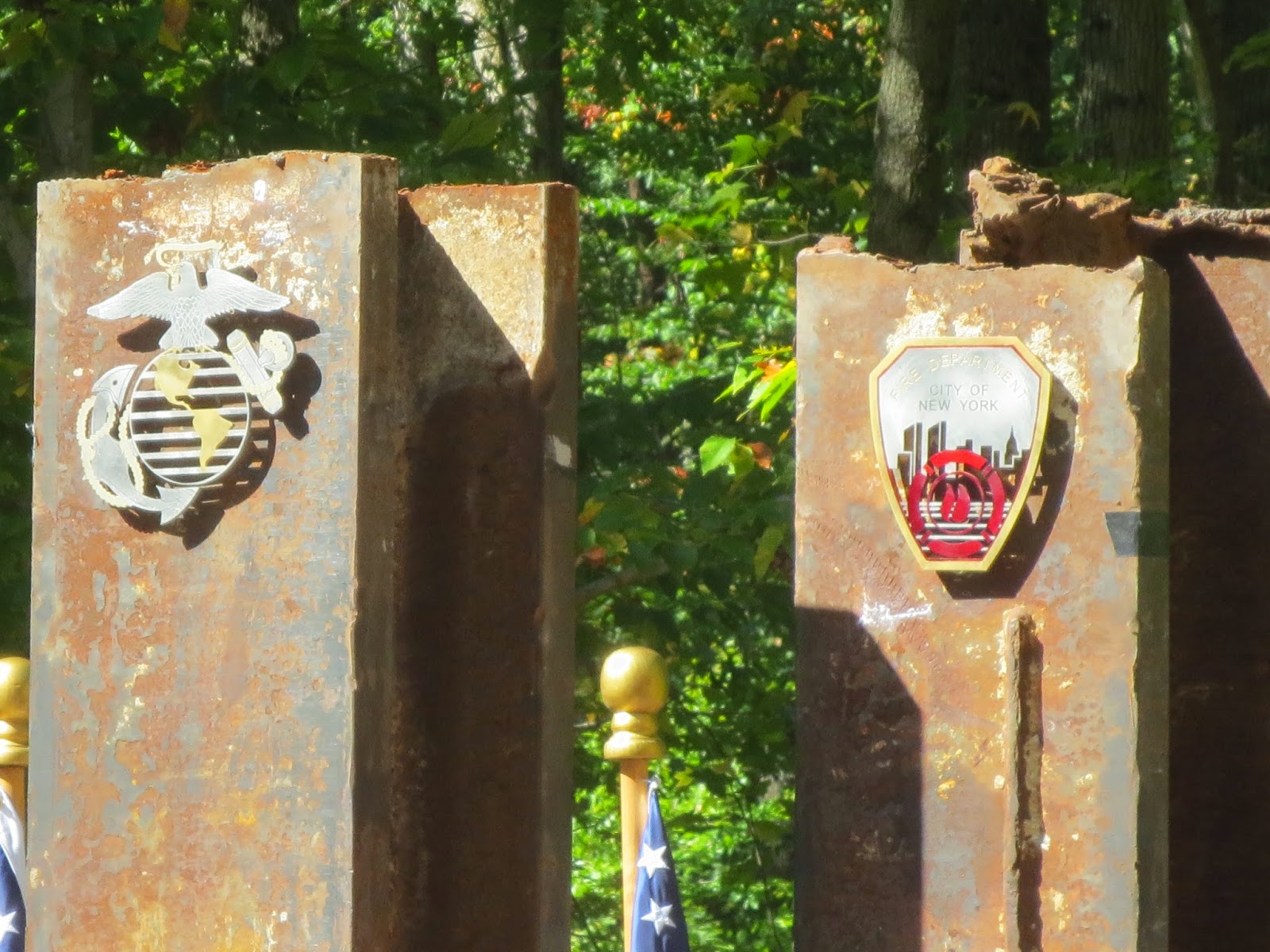 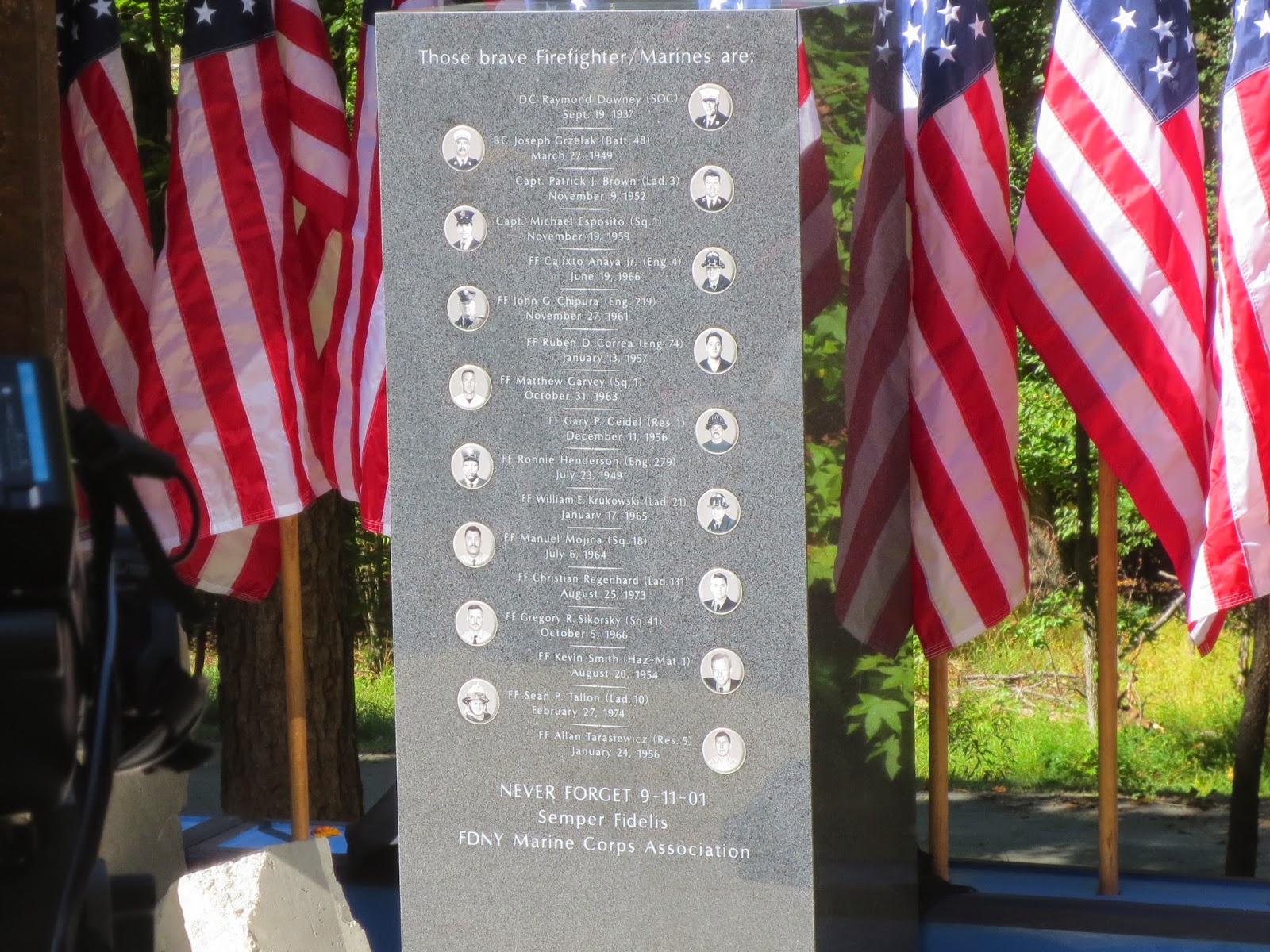 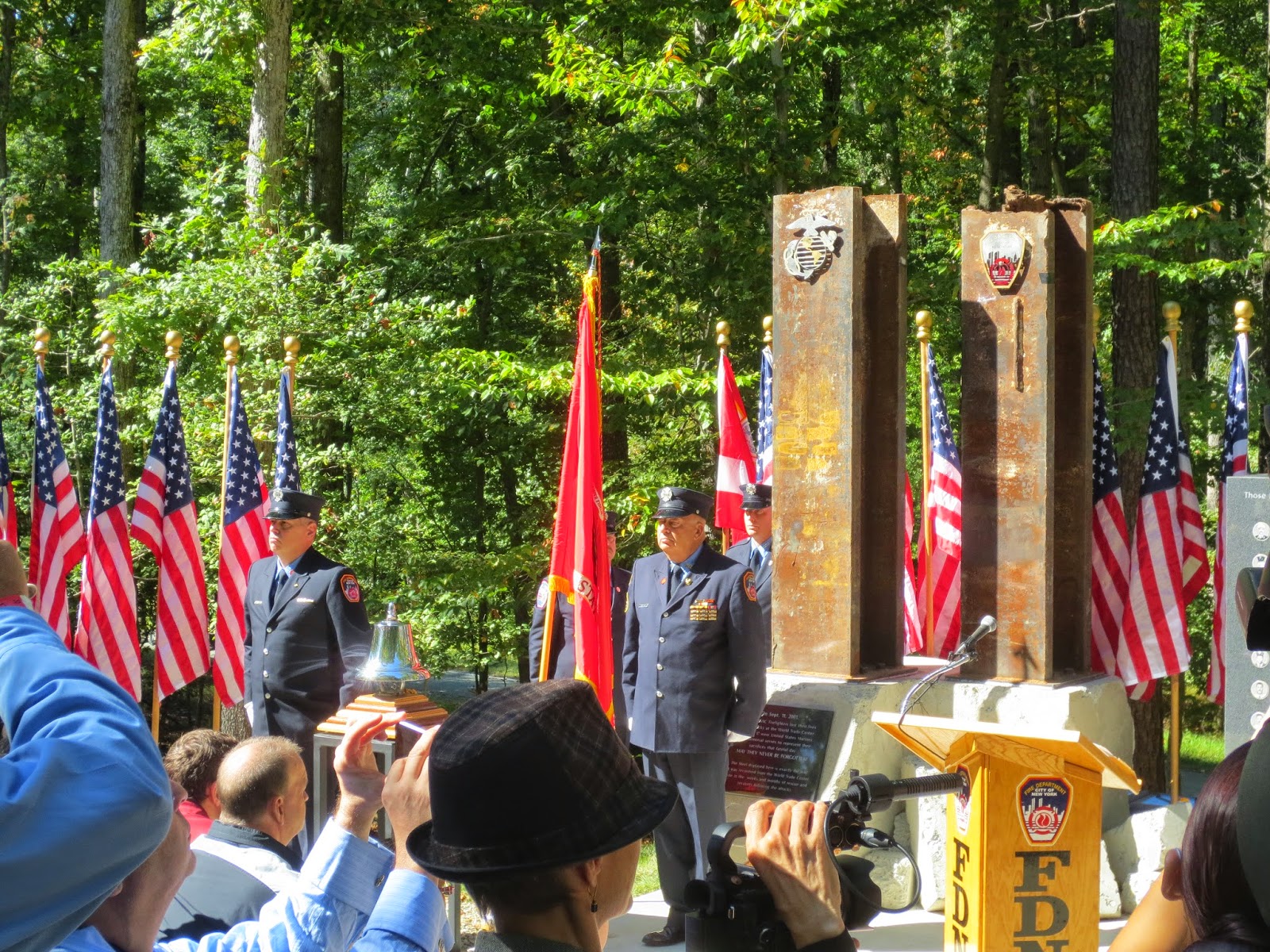 Did I mention 'tissue alert?' There wasn't a dry eye in the house. The surviving family members were present and seated in the front. Emotions ran just a little high.